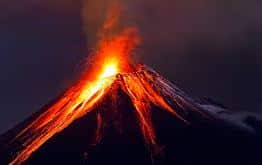 Volcano was formed as result of the movement of plates which pressed continuously since million years ago until now. Knowledge about volcano began from the attitude of human and primordial man who had closed relationship with volcano. It is known from the discovery of fossil which was found in Africa and Indonesia in form of human bones that were buried by volcanic sediment.

Knowledge of plate tectonics is the solution of a natural phenomena riddle including a row of the hill, mountain, continent, earthquake and volcano. Earth planet has lots of liquid and water on the surface. Both of the factors deeply affect the formation, evolution and magma composition as well as the location and the origin of volcano.

The heat inside the interior of the earth is the heat formed during the formation of the earth about 4.5 billion years ago, at the same time the heat arising from natural radioactive element, such as elements isotope k , u and th toward the time. The earth at the time of formation was hotter, but later on gradually will be cool based on the its history development. The cooling process occurred as a result of dissipation of heat and intensity of volcanism on the surface. Propagation heat from within the earth to the surface in the form of convection, where materials which are heated on the basis of a coat, the depth of 2,900 km under the face of the earth, move spread and narrows nearby seawater. On the upper part of a coat, around 735 km under the face of the earth, the materials are cool down and become solid, then sink back inside the flow of the convection.

Lithosphere include the crust generally has the thickness of 70-120 km and it splits into several large fragments called tectonic plates. Plates move each other and also go through to the convection coat. The pedestal lithosphere lays above the weak part of upper coat, called also asthenosphere. The weak part of asthenosphere occurs at or near melting point, as consequence some parts of asthenosphere some part are melting although some of them are still solid. The crust has 35-km thickness, low density, and the age is 1-2 billion years old, while the thinner is more solid and the age is no more than 200 million years old. The position of continent crust is upper than in the ocean crust because of the differences of density, and both of them are float above the asthenosphere.

The crusts of the continent move away one to another horizontally, prompting a breach or fault that become the road to the surface of molten rocks or magma thus it forms a bow of volcano in the middle of the continent or flood of lava along the breach.

Depletion of the ocean crust due to the pleats give the magma opportunity to break through to the bottom of ocean, breakthrough of this magma is the flood of lava that form a row of shield volcano.