Contoh Descriptive Text About The Great Wall in China 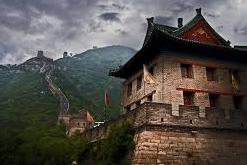 The Great Wall in China

China Great Wall is the longest building ever made by human which is located in Tiongkok or China. The Great Wall of China is considered as one of seven wonders in the world. In 1987, this building was listed in the world treasure site of UNESCO.

The great wall is not only long, but it is also a collection of short walls which follow the shape of North Tiongkok mountain range. On April 18, 2009, the government of China announced after the accurate investigation that this great wall has length 8,851 km.

In 2009, the department of survey and mapping and the department of culture treasure of China conducted a research to recount the length of the great wall. The result of the research showed that the great wall was longer than what is already known. According to the count, the overall length reached 8,850 km. that project also had found the other parts of wall in which the length is 359 km, ditch 2,232 km, and also the natural gate like hills and river 2,232 km. The average length of China great wall is 5000 km.
[sc:kodeadsense]
The Great Wall of China is called as human-made building which can be seen with bare eyes from the space. However, after it is investigated by the astronauts, that perception is wrong. From the low orbit, human-made building such as road, ship, and city is indeed can be seen, but when it goes through the earth on thousands feet height, nothing can be seen, including the Great Wall  of China.

The first China astronaut who went to the space in 2004, Yang Li-wei, also stated that he couldn’t see that building. Perception about the great wall which was seen from the space already became a myth. Even, it is written in the China school book. The earliest evidence was written by an antique stuffs collector from England, named William Stukeley in 1754 which compared the Great Wall of China and Hadrian Wall in England by stating that Hadrian Wall could only be defeated by the great wall of China, which was the most important building in the world, so that it could be seen from the moon. The book of Richard Halliburton, an adventurer from America in 1938 entitled “Second Book of Marvels” made people more believe that the Great Wall of China could really be seen from the space.

The history of the walls building was to limit the city areas and residents’ house. The other theory also said that it is for being the defence fort, the sign of limitation and line of communication to deliver message.

The beacon tower was used to deliver military message by making smoke signal in the afternoon and fire at night to inform the enemy movement. This is one of the most important parts of the Great Wall, and this structure was made in every part of Great Wall by using local material. In the mountain area, there were bricks arranged on meadow or desert which was made of clay. The shape can be round, oval, or square. There are three kinds of tower; one which was built on the wall, in the wall, or separated to keep eyes on the enemy.