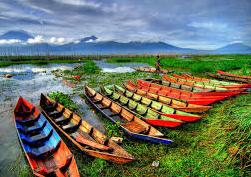 Long time ago, lived a very powerful dragon named Baru Klinting. When it was meditating in the jungle, it discovered by people – the Ngebel villagers who are trying to find animals for a food. Without hesitate, all the villagers killed Baru Klinting and cut the body to take the flesh and brought to the village.

After arriving at the village, they held a big party for 3 days and 3 nights. All villagers attended the event and ate the meat of Baru Klinting that had been cooked a day before. However, there was a villager who did not attend the party. She was an old woman named Nyai Latung.

On the third day, there was a boy that suddenly appeared. He looked very dirty; his clothe was so bad, so that he looked like a beggar. Then he walked down the village with a very hungry stomach. He knocked all the doors of the house to ask for food, but no one opened the door, there are even some villagers who drove him away harshly.

Even the situation got worse, he did not give up, until he arrived at a very bad house belonged to Nyai Latung.

“Excuse me Grandma, I’m very hungry. Would you mind to give me a food? “Asked the boy. Nyai Latung felt so sorry to the boy and she replied, “But I only have a dish of rice without any other food. If you want it, you can eat.”

“No problem, I will accept it happily,” the boy replied.

Then she gave the boy that rice. Immediately, the boy ate the rice very fast. It was very clear that he was so hungry. When he had finished eating, Nyai Latung began to ask about him deeper.

“I was a wanderer. I do not have parents, even siblings, “the boy replied.

“Then, stay with me here,” said Nyai Latung.

“I am sorry, I can not do that, I have to continue this journey. However, before I go, I will give a punishment to all the people here. As a sign of my thanks to you, Grandma. I’ll give you a mortar, and when you hear a gong sounds everywhere, immediately get onto this mortar.” Explained the boy to Nyai Latung.

“Hey you, little boy. How dare you say that. Beware… Little boy, you’ll die soon,” said one of them. “If you are strong, then take this little stick from the ground,” the boy said.

Then the child plugged a little stick into the ground and allow them to take it. One by one, the villagers took the turn to pull it out. Men, women, children and old man, had tried, and nobody could do that.

“Look, there is no strong person in this village,” the boy sneered.

“Damn you, Try it by yourself. Can you?” they said.

Immediately, he pulled the stick out, then he succeeded. Then, there was a strangeness. There was a lot of water flow out from the hole where the stick was pulled out. At first, they were happy because they think that it was a spring. However, the water did not stop and increasingly flooding the village very quickly. They were very panic. On the other area, Nyai Latung heard the noise of the gong and she was immediately got onto the mortar.

Sure enough, it did not take a long time for the water to drown the village and all the people, except Nyai Latung who survived. Obviously, that mysterious boy was the incarnation of Baru Klinting, the dragon they had killed before. The village has now become a swamp called Rawa Pening.