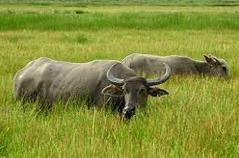 Buffalo, Crocodile, and the Mouse Deer

Once upon a time, a mouse deer was walking in the forest. He was thirsty so he went to the river to drink. When he was drinking, suddenly, he heard a sound. Then, the  mouse deer searched the source of the sound.

“Good morning, mouse deer. We are not playing. The crocodile wants to eat me whereas I have helped him. Oh how poor I am.” The buffalo answered limply.

“Wait, wait. I don’t understand. Can you tell me what happen actually? So that I can solve your problem.” The mouse deer said.

Then, the buffalo told him.

The mouse deer only nodded his head listening to the buffalo’s story. He thought the way to help the buffalo.

“Yes, that was the story. But, I can’t be blame. I had been stricken for three days. I am so hungry. He said he wanted to help me. I thought he should fully help me. Because I’m hungry, he has to help me so I will not die. So that I want to eat him.” The crocodile tried to defend himself.
[sc:kodeadsense]
“That’s right Mr. Crocodile. So you are not wrong to eat Mr. Buffalo. He should help you fully.” The mouse deer said.

“But, I am still not sure if that’s only by a story. To make sure it that Mr. Crocodile is right, so we have to redo the actions.” The mouse deer said.

“What do you mean mouse deer?” the crocodile asked.
“Mr. Crocodile. We must repeat all of what happened when Mr. Bufallo helped you. All are repeated from the beginning when you were stricken by a tree and Mr. Buffalo came to help you.” The mouse deer explained.

”You mean that I must turn my bite loose and I get stricken by a tree again? Ohhh… I don’t want. I am afraid that the buffalo will run away.” The crocodile refused.

“Don’t worry Mr. Crocodile. I will guard him because I am on your side. Moreover, with injured legs, how can he run?” the mouse deer ensure.

“Oh… Okay. I agree. But, you must guard him very well.” The crocodile agreed.

“Count on me. I can run faster than Mr. Buffalo does. How about you Mr. Buffalo? Do you agree?” The mouse deer asked.

Mr. Buffalo only nodded weakly. He could be patient and prayed to be given fairness.